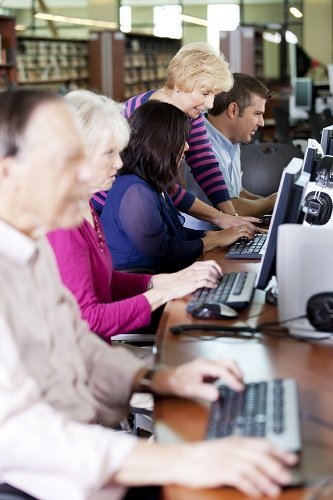 Awen Cultural Trust operates the libraries in Bridgend, as well as some community centre and other cultural buildings. It provides access to free Wi-Fi in its buildings and open access to computers. Library staff often provide advice and support to library users on digital and some libraries run group sessions supporting people to get online. Bridgend Job Centre Plus provides services to all Job seekers in Bridgend, including job searching and access to job seeker benefits.

Bridgend Job Centre promoted the work placement to their job seekers through the work coaches. Those interested where invited to an informal information session delivered by DCW and Awen Cultural Trust. The session enabled the job seekers to learn about the placement opportunities and the digital champion training which would be delivered by DCW. They were given the opportunity to sign up to the training, which was a requirement before starting the placement. Seven people attend the informal session with six people signing up to the training. Five of those went onto the placements in the participating libraries in Bridgend.

Impact of our support

Since the being of the Pilot project, eight job seekers have being involved in the voluntary work placements in the libraries.

Debbie, one of the volunteers, said that she has really gain from her voluntary placement by helping a number of customers with their computer skills. She would really like to continue to volunteer past the six week placement.

“The staff really appreciate the volunteers being available to support library users with their digital needs. They have definitely added value to the service we provide in the Libraries, as some of our customers have also appreciated gaining up-to-date skills in applying for jobs.”